Story. We needed a yet another domain-specific language for internal data exchange and configuration of the system. The existing solutions mostly focused on modeling the configuration as object trees in which the data is nested in hierarchies with no cross-references between the objects.

For example, think of object trees as JSON objects or arrays. We found this structure to be highly limiting for most of the complex messages and system configurations. Our use cases required objects in the data to be referenced among each other – instead of object trees we needed object graphs.

Moreover, we wanted the serialization itself to be readable so that an operator can edit it using a simple text editor. JSONable structure offered itself as a good fit there with a lot of existing assistance tools (JSON and YAML modules etc.).

However, JSON allows only a limited set of data types (numbers, strings, arrays and objects/maps). We found that most of our data relied on a richer set of primitives than was provided by a standard JSON. This extended set includes:

Hence we developed Mapry, a generator of polyglot de/serialization code for object graphs from JSONable structures.

The schema of the object graph is stored in a separate JSON file and defines all the data types used in the object graph including the object graph itself. The code is generated based on the schema. You define schema once and generate code in all the supported languages automatically. Schemas can be evolved and backward compatibility is supported through optional properties.

Since the serialization needs to operate in different languages, only the intersection of language features is supported. For example, since Go does not support inheritance or union types, they are not supported in Mapry either.

The following diagram illustrates the workflow. 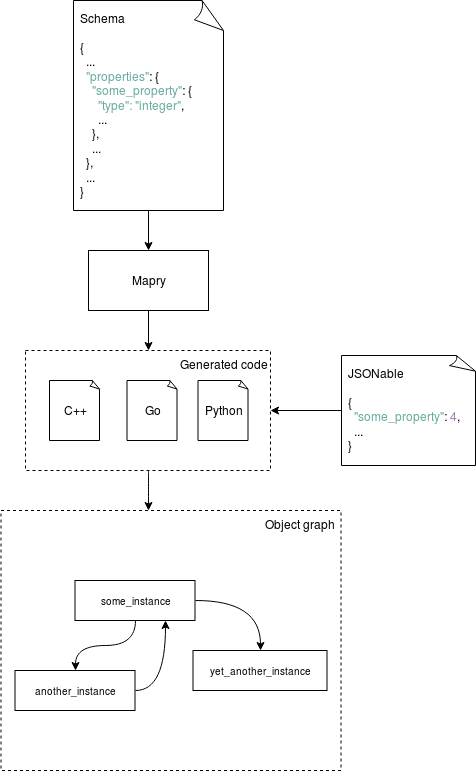